“Exploring Hinata’s Struggle of Talent vs. Hard Work in Haikyu!! To the Top”

To become skilled at anything takes hard work, no way around it. At the same time, while there is no improvement without hard work, it’s hard to say that some people don’t have it easier than others. If one has an innate talent for the sport, it lends itself to a quicker growth curve; that hard work will pay off faster compared to someone without the same level of talent. Two-time Olympic figure skating champion Yuzuru Hanyu is no stranger to hard work, or to the pressure of competition. According to Hanyu in a 2016 interview with Fuji TV, “Effort will lie, but it will not be in vain… If effort does not lie, then the person who practices the most will win every time… I watched many matches where no matter how much effort someone puts in, if they can’t win, then they can’t win. On the other hand, there are young athletes that can win based on their spirit… so in that sense, I think effort will lie. But that doesn’t mean it will be in vain. If effort lies, you will think of more different methods of hard work. Discovering the right way to work hard is more important.”

Haikyu!! loves to explore the ups and downs of this; does hard work win, or will talent manage to overcome? While it has touched on this idea many times before, this season is shaping up to be an exploration of that in regards to its two main characters, Hinata and Kageyama. 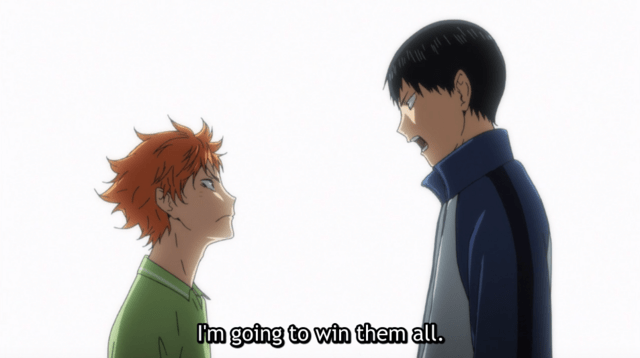 Kageyama and Hinata have always been a combination of allies and rivals. They are on the same team, and they work together extremely well, always challenging each other to do better, but they also compete over tiny things. They started out the series as enemies, and that inherent sense of competition has never gone away, from seeing who can sprint faster to who has grown more over the summer. Not antagonistic, but competitive. Most important between them is their shared love for volleyball, and that they both work incredibly hard to hone themselves to be better at it. Where they differ is that Kageyama is a natural born genius at the sport, and Hinata isn’t.

Kageyama’s natural genius is one of the largest points of his character. He isn’t the type of person that coasts off his natural talent alone, but him being finely attuned to the game is why he is able to adapt constantly on the field. He loves the sport, and is good at it, and the fact that he can innately adjust himself to pull off wild maneuvers with ease makes him a formidable opponent. It’s not hard to imagine him going pro in the future, for his talent is a formidable wall for many. In season two particularly, his rivalry with Oikawa centers around the fact that, despite Kageyama looking up to Oikawa, Oikawa has a lot of baggage surrounding the fact that Kageyama’s natural talent means he will be eclipsed someday. Kageyama is a threat as a cornerstone of Karasuno, but he is also a threat as a rising star. 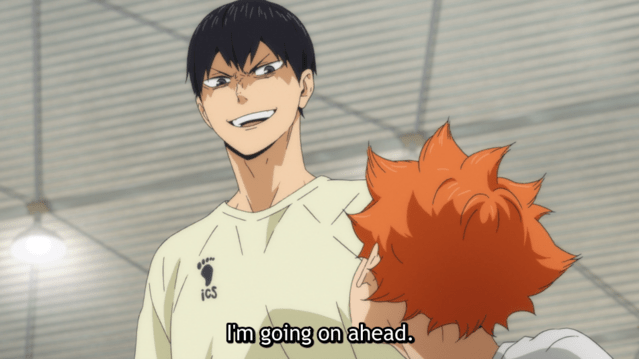 By contrast, Hinata doesn’t have any natural talent. He was born rather short, something very disadvantageous in a sport where height matters. While he has no shortage of vigor or a want to improve, he’s already in a precarious position from the start. Even more so, Hinata starts out this season being left behind. Kageyama is chosen by the national training camp, and Tsukishima is chosen by the Miyagi training camp. Hinata, despite being submitted for consideration, isn’t seen as talented enough. Coach Washijou delivers this harshly: without Kageyama, Hinata doesn’t shine. He may be good, but he’s not good enough on his own. Sneaking into the training camp doesn’t help because at the end of the day, he has no place there. He has already been deemed not worthy. Although he is allowed to stay on as a ball boy, that’s different than being acknowledged as a player.

Being a ball boy doesn’t seem very advantageous. He isn’t allowed to play, not even practice with the other members. Most of the time he is relegated to doing chores, not able to traditionally hone his own skills. At the same time, he is granted the opportunity for observation, to be able to see as a spectator. This entire time, Hinata has been on the court, not necessarily watching it from the outside. He may not be part of the team, but he is still able to witness a practice up close, and the series has already made clear that most practices are held in secret, or at least aren’t available for public viewing. Had he stayed back at Karasuno, Hinata wouldn’t be able to be part in this at all. While Kageyama is able to practice as an athlete, Hinata is able to study more theory. If he is just as devoted to the sport as Kageyama is, he will find a way to use this opportunity to his advantage.

#Anime #Manga #How Anime Monsters Help Us Understand Ourselves -BB 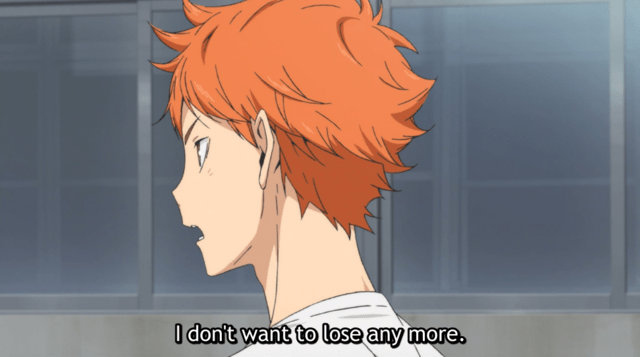 So says Hanyu, hard work isn’t the guaranteed way to success, you can work hard and still fail. However, there are different types of hard work, different ways to apply yourself and improve at the thing you love. Hinata had been left behind on the traditional front; by not being accepted, he has been denied an opportunity. At the same time, he has been offered another opportunity, one that allows him to study on his own in a different way. Kageyama, ripe wth talent, is forging on ahead. However, Hinata has his own ways to keep on going too. Talent may be the easier way, and it may lend itself to more opportunities, but hard work means never giving up in the face of that. It means to keep going, to keep making your own path until you reach success.

How do you think Hinata will pull ahead? Let us know in the comments!

Noelle Ogawa is a contributor to Bubbleblabber and Cup of Moe. She can be found on Twitter @noelleogawa.