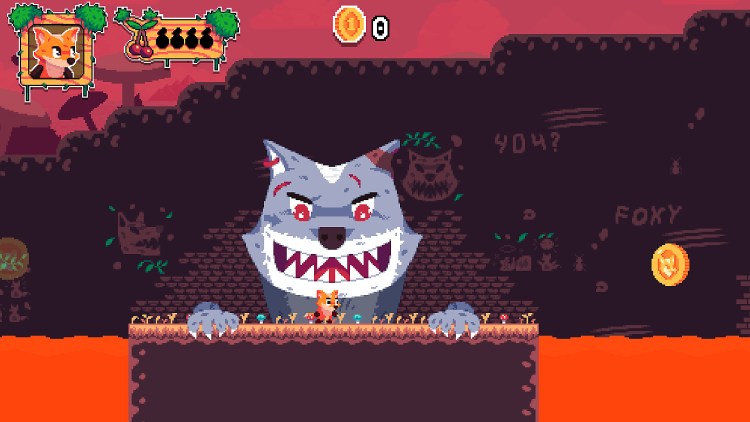 After the events of the first Foxyland game, our furry hero Foxy settled down with the love of his life, Jenny, and start a family. Life is going pretty well with his wife and their two kids, Tim and Cindy, until the evil wolves brother, Duke and Jax, decided to trash Foxy’s perfect life by kidnapping their kids. It’s up to Foxy and Jenny to save them by surviving treacherous obstacles and enemies.

Foxyland 2 expands on its predecessor. Whereas the original game was designed by picking up rubys and clearing levels, this sequel is divided into 3 levels: forest, desert and mushroom land. Each level has 12 areas to clear where the 12th level is a boss battle. This time around, instead of requiring rubys to clear a level, you can simply zoom by and finish it. However, you’ll end up at a roadblock. See instead of picking up X number of rubys to clear a level, you need to pick up gold coins in order to keep the path from being blocked while moving around on the world map. 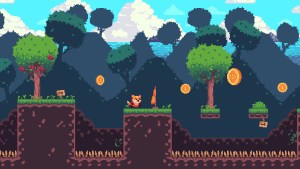 The developer has also given Foxy a new way to defend himself: shooting cherries. You still pick up cherries, but this time you fire them at enemies to clear your path. You can only carry 4 at once, so it does require a bit of management in order to find a way to clear your path but also preserve them for possible more treacherous encounters. Throwing cherries can also activate dangerously placed levers and collect Special coins.

Additionally, the Special gold coins are often in plain sight and otherwise very well hidden and surrounded by deadly obstacles. While the game is far from being clear as to where the coins are hidden in each level, you’ll notice a spider-like spot on the ground or walls where a hidden place is ready to be searched. If you don’t pay attention earlier on, it can lead to a frustrating backtracking time as some levels are highly frustrating and can almost cause PTSD simply by the thought of revisiting them. 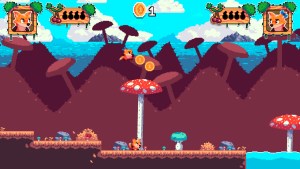 While you don’t have to collect all of the Special coins to go through the game, there are certain areas on the world map where you are required to carry a set amount of special coins in order to progress. While it encourages players to search thoroughly every level, being forced to collect things to progress forward feels annoying and a cheap way to add gameplay value. Foxyland 2 also introduces a co-op multiplayer to team up with a friend and hunt down the wolves.

Another change, which is highly questionable, is the fact that they swapped three hearts as health for a lives/continues system. Meaning that one hit means you’re dead. This increases the difficulty significantly considering some of the “newer” enemies can’t be killed by jumping on them. And I do use the term “newer” loosely as most enemies from level 2 and 3 are simply the game which a new coat of paint and a few more attacks up their sleeves. Boss battles are unnecessarily frustrating mostly due to the one-hit kill mechanic; they’re a nice addition, but they could’ve spent a bit more time in the brainstorming process. 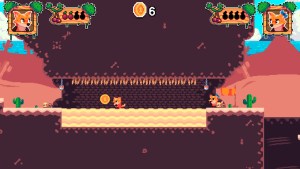 Level design is fair, while oftentimes feel cheap. As you progress through each area, levels get progressively harder where the third level as some of the most frustrating areas I’ve ever experienced; not necessarily for level design itself, but enemy placement can lead to cheap and frustrating deaths. Another nuisance is sometimes you’ll be on higher platforms and need to jump down, however, you can’t tell if you’re gonna land on safe ground or a floor full of spikes. Thankfully, they’ve added a checkpoint flag in every level meaning that death doesn’t mean you need to restart from the start.

Much the previous entry, the game has a cutesy 8bit visual look to it. There are a few detection issues throughout the game, however, as sometimes stomping on enemies will result in death when you clearly jumped squarely on it; the same thing as some clearly jumping over a flying threat will result in your death even without touching it. A few death cinematics occurred when I wasn’t even dead. Audio-wise, the cute score matches the game and on-screen action, however, it’s pretty forgettable. Despite its frustrating level design and annoying boss fights, Foxyland 2 is a nice improvement from the first game. With a well thought out world map, variety in levels, added boss fights, it’s a step in the right direction. While some aspects could’ve been a bit better and more polished, I’ll be curious to see what they come up with if they move forward with Foxyland 3.

The Crown: Prince Harry & Duchess Meghan Should be Main Focus of a Future Season -BB