“An Introduction to the Collected Works of Frederick D. Funkle
“ 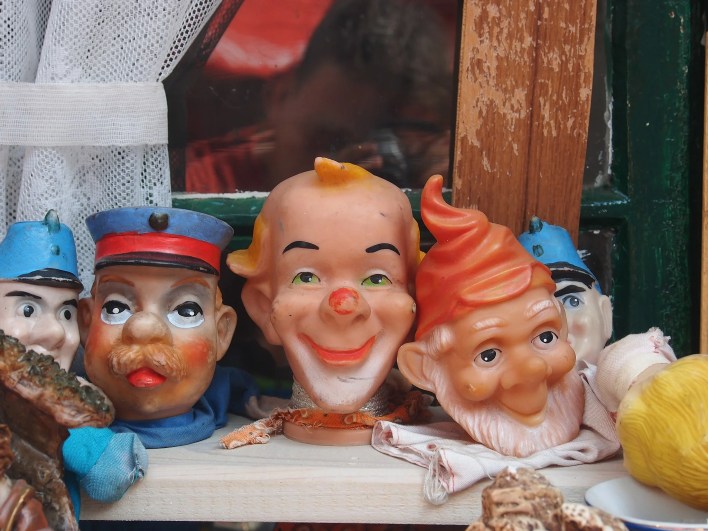 What can one say about Frederick D. Funkle? Revered as perhaps the greatest semi-upper continuous functional analyst who ever lived, his contributions continue to confound us and often contradict one another. His body of work is broad but unnervingly shallow. His writing style is impertinent, presumptuous, and tinged with an undeniable disdain for the very material he studies. His disregard for standard notation and his penchant for starting in the middle of a proof and simultaneously working toward the beginning and end have made it extremely difficult to evaluate the contributions of this iconoclastic individual.

But those who know only of his mathematics run the risk of missing the other facets of Frederick Funkle. Did you know, for instance, that he was one of the great handpuppet manipulators in the state of New Jersey? Were you aware of his contributions to crossing-guard etiquette? Did you know he had the largest collection of fanny packs in the Mid-Atlantic States?

Frederick Funkle was born in a small apartment in Hoboken, NJ, just a block from where David Hilbert once stayed for a week. Although unaware of who David Hilbert was, Frederick walked by that house on a daily basis. This early influence seems to have had, via osmosis, a fundamental impact on Frederick. Much of the rest of his career was spent walking past the houses of famous mathematicians.

What Happens to White Christmases as the World Warms?

Although no one in his family ever demonstrated an aptitude for mathematics, and many were quick to demonstrate the opposite, mathematics was no stranger to the Funkle household. Several of Frederick’s aunts owned calculators and weren’t afraid to whack Frederick’s knuckles with them when he reached for a dinner roll.

In elementary school, although Frederick was known to have a short attention span and a particularly poor memory, he excelled at mathematics, often to the consternation of his teachers. Once, when he was six, his exasperated teacher instructed him to add up all of the integers from 1 to 100 to keep him busy. As she returned to the front of the room, he followed her. She turned and asked, ‘‘Have you already finished?’’

Microplastics Pollution Is Everywhere. Is It Harmful? -BB

‘‘Finished what?’’ he replied, much to the amusement of his classmates.

By the time he graduated from high school, Frederick knew his calling. He had become enamored of mathematics education. His first paper, ‘‘Positive Reinforcement to Discourage Division by Zero’’ began his storied career as a math educator who, against the current tide, advocated the rewarding of students for their errors. His approach swept through the math education community like a tsunami, leaving a similar pattern of destruction in its wake.

But it wasn’t long before the siren song of mathematics proper drew Funkle away. He became intrigued with the question of the constructability of lengths using just a compass and straightedge. After claiming to have refuted a variety of previously proved constructible lengths, it was pointed out to him that the compass involved is not the kind that tells direction. Undaunted by this early faux pas, Funkle now threw himself into mathematics proper.

In homage to Andrew Wiles, he moved his desk up to the attic for an intended seven years, but found that he wasted time trying on old clothes. So he moved to the basement. This was one of his most productive periods, resulting in the seminal papers ‘‘Sub-Bases of Bases III’’ and ‘‘Cellar Decompositions of Manifolds.’’

When he came down with the flu, his colleague at Western Harmonic, J.H.C. Blackhead, came to visit him. Lacking the ability to hold up his end of everyday banter, Frederick asked him, ‘‘What was the number of the taxi you came in?’’

At this point, Blackhead realized that Frederick could stymy him like this all day. He shook his head ruefully, vowing to himself never to visit again.

Frederick’s contributions to number theory include the Funkle Algorithm, which immediately gives the number of distinct factors of any prime in polynomial time. In topology, his proof of the Poincare´ Conjecture in dimension 1, showing that the unit circle is the only simply connected compact 1-manifold without boundary, sent topology into a decade-long tailspin.

The "China Threat" and the Future of Global Science

His Funkle Asymptote is defined as an asymptote that has transcendental slope. Although there is no obvious advantage to naming such asymptotes, it is undeniable that Funkle was the first person to give them a name.

What are we to make of a man who refused to talk about his work, and would only sing operettas at seminars? How do we evaluate a paper that both proves a result and provides a counterexample?

And of course the strange circumstances of his death leave many more questions than answers. In the middle of a talk on his recent results on Funkle Functors, an undergraduate pointed out an obvious counterexample. Funkle stammered a bit and then clutched his chest and fell to the floor. When someone attempted to apply a defibrillator, Funkle pushed the paddles away, perhaps realizing the result was beyond repair.

Here then are the collected works of Frederick Funkle. Section I consists of his famous correspondence with Mikhail Gromov, including all the unanswered letters he sent. Section II is a compendium of his publications, many having appeared in the Monthly, consisting primarily of his solutions in the problems and solutions section.

Moths Flee or Face Bats Depending on Toxicity

Section III includes the reviews he wrote for Mathematical Reviews of his own papers, which by a clerical error, he was asked to author. Many argue that his reputation was built on these reviews, and he took full advantage of the opportunities the situation provided.

It is not for us to determine Funkle’s place in mathematics. One can never know what may turn out to play a critical role in the future and what may prove to be meaningless drivel. But there can be no doubt that Frederick Funkle was unique in the annals of mathematics. And for this we should be eternally grateful.

#Science #CRISPR-Edited Babies Arrived, and Regulators Are Still Racing to Catch Up #BB

English-subbed Trailer for Reconguista in G the Movie II Posted for February 21, 2020 Release