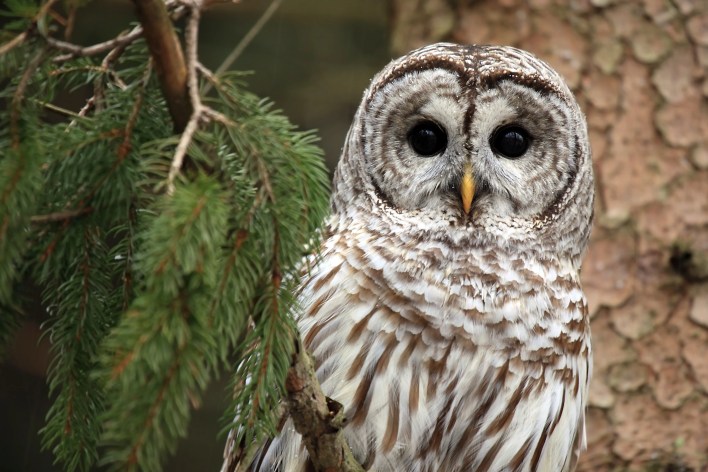 The barred owl has a very distinctive call. “It’s the one that goes ‘who cooks for you.'” <<barred owl call sample>>

Connor Wood is a conservation biologist and applied ecologist at the University of Wisconsin-Madison. Who does a pretty great barred owl impression himself. <<impression of barred owl>>

Barred owls are native to the eastern U.S. But in the last century, they’ve crossed the Great Plains, flooded into Canada, and taken up roost in the Pacific Northwest… where they’re a major threat to northern spotted owls.

“Barred owls are bigger and more aggressive. And so barred owls have been able to basically drive spotted owls out of their preferred nesting areas. And also because they’re more flexible with what they eat, there can be more barred owls on the landscape.”

“And the big question was: what is the size of the barred owl population there, and how fast is it growing?”

To answer that, Wood and his team deployed audio recorders in roughly 1000 locations, throughout 2300 square miles of the northern Sierra Nevada. And then they listened—for two years—collecting the faint calls of spotted owls <<spotted owl>> and barred owls, too. <<barred owl>>

In total, they gathered 200,000 hours worth of audio. “It was pretty daunting seeing it all accumulate and knowing we had to make something intelligible out of it.” Algorithms that combed the audio for owl calls helped make sense of it all, and through models, the researchers were able to estimate who was living in those forests—barred owls or spotted owls—and approximately how many of them there were.

“The key finding is that barred owls occupied about 8 percent of the northern Sierra Nevada landscape in 2017. But that jumps to 21 percent in 2018. So that’s a 2.6 fold increase in just one year. On one hand, that’s really worrying, because it suggests that barred owl population has begun to grow really rapidly and thus poses an immediate threat to California spotted owls. But on the other hand, it’s also really exciting. We’ve caught the problem early and have a chance to do something about it. Most biological invasions aren’t identified until it’s too late.”

The results are in the journal The Condor: Ornithological Applications. [Connor M. Wood et al, Early detection of rapid Barred Owl population growth within the range of the California Spotted Owl advises the Precautionary Principle]

Wood and his team advise that it might be necessary to take lethal action: remove the barred owls before they wipe out California spotted owls. Assuming we give a hoot about the spotted owls’ survival.

#SocialMedia #What To Expect From Carnival Row Season 2 #BB