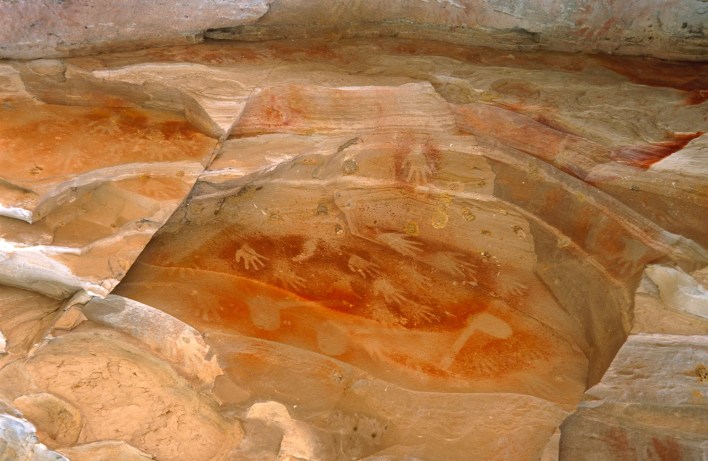 Indigenous communities and archaeologists fear thousands of historic Aboriginal sites and artefacts have been damaged—or destroyed—by fires that have ravaged Australia. These places are essential for understanding the movement of people in Australia and hold huge value for Indigenous groups.

Since September, conflagrations have razed more than 10-million hectares of vegetation, mostly in the eastern states of Queensland, New South Wales and Victoria—one of the largest events on record.

Much of the area destroyed was in national parks and other forests, where tens of thousands of important Indigenous sites are found, including many that have not been officially recorded, says Tiina Manne, an archaeologist at the University of Queensland in the Gold Coast and the president of the Australian Archaeological Association (AAA), which represents the interests of the country’s archaeologists.

These sites show where people lived and how they moved across the landscape over tens of thousands of years, and have helped researchers understand the development of Aboriginal cultural practices, such as making rock art or carving canoes and shields from tree bark.

Researchers are yet to do a formal assessment, but Manne says thousands of Aboriginal sites will have been affected by the fires. These places include ‘culturally modified’ trees that have been altered for traditional uses, as well as rock art and engravings, stone-tool sites and grinding stones, some of which may be tens of thousands of years old.

With fires still smoldering and roads in forested areas closed or blocked by fallen trees, archaeologists and Aboriginal land managers haven’t been able to assess the damage in many regions. “It’s not a question of if significant sites have been impacted, it’s just a matter of determining the extent and how badly they’ve been impacted,” says Georgia Roberts, an independent archaeologist in Bacchus Marsh, Victoria, and secretary of the AAA.

FDA Approves an Ebola Vaccine For the First Time

The association is now calling on the government to conduct assessments of cultural sites as part of its fire recovery plans.

Roberts is concerned about several culturally rich regions that have been subject to extensive fires, such as parts of eastern Victoria in the lands of the Gunaikurnai people. Sites there date back 20,000 years to the last ice age.

Glenda Chalker, an Aboriginal elder from Dharawal Country in the Southern Highlands of New South Wales, thinks the fires have affected thousands of sites in her region alone. The vast, forested area around the Warragamba Dam, Sydney’s main source of drinking water is partly on Dharawal Country. In 2019, an assessment of the area found 300–400 previously unknown Aboriginal sites, says Chalker, but in the past few months fires that tore through the area burnt most of the vegetation. “We have a lot of concerns about damage to lots of sites, but we don’t have access at the moment,” she says.

Stretched Too Thin by Social Media

On the south coast of New South Wales, Graham Moore, an Gurrungutti Yuin elder, says scarred trees have also been damaged on Yuin land. He fears for numerous sites in Gulaga and Biamanga national parks that might have been damaged either in blazes or from water dropped by aircraft to extinguish them. These sites include stone arrangements that are thousands of years old.

Fires have probably scorched many culturally modified trees. But archaeologists are also worried that soot could have smothered engraved and painted rock art spared from direct fires. Soot was the most common cause of damage to Indigenous sites following bush fires in the alpine regions of Victoria in 2003, says Alice Gorman, an archaeologist at Flinders University in Adelaide. Even sites that would seem to be more robust, such as quarries where stone tools have been dug out and scattered on the ground, are likely to have been damaged by fires and radiant heat, she says.

Gorman also warns that there’s a significant risk of further damage to sites following the fires because people involved in clean-up efforts aren’t always aware that there are heritage sites present. Chalker knows of four culturally modified trees near Wingelo that were burned; several of these were then pushed over because they were deemed unsafe.

The extreme fires might, however, have opened up areas of dense vegetation that were difficult for people to access, potentially revealing important undocumented sites, says Paul Taçon, who studies rock art at Griffith University, Gold Coast.Although he holds grave concerns for rock art in the charred Greater Blue Mountain World Heritage Area that sprawls to the west of Sydney.

Fires that swept through the Budj Bim Cultural Landscape in southwestern Victoria earlier this month, weren’t as intense as other blazes and didn’t damage the 6,000-year-old channels and pools carved into rock by Gunditjmara people to trap eels. But the fires did reveal previously unknown sections of the ancient system, says Roberts. “One of the very few silver linings to these fires, is that we will be able to get into these areas now, and identify new sites.”

This article is reproduced with permission and was first published on January 23 2020.